From Bronx to Brooklyn and Manhattan to Queens, New York City is an eclectic mix of culture and cuisine.  In this city, there truly is something for everyone.  The moment you step onto the sidewalks of New York, you will find yourself humming Sinatra’s classic tune as you proudly proclaim, “I want to be a part of it, New York, New York!” 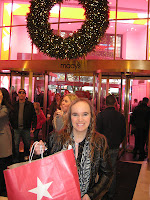 The moment I walked up the steps of the subway station, the first building I laid eyes on was Macy’s Department Store right in the heart of Herald Square.  Having grown up faithfully watching “Miracle on 34th Street” every single Christmas, I must admit that I was a little awestruck to actually be planting my feet on 34th Street.  For me to be in New York City during the holiday season made it even more magical and it felt as if they must have been right when they told Virginia that there was indeed a Santa Claus.


If you plan your trip to New York during the holidays, you must take a moment to admire the Christmas window displays outside of Macy’s in particular.  This year the windows featured Make-a-Wish children, so they were not only eye-catching, but also pulled on your heartstrings as well.  Unlike your average department store windows, these wondrous windows become striking works of 4D art, complete with an elaborate multimedia experience that will drop your jaw and raise your eyebrows. 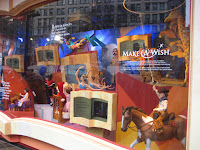 After your “window shopping,” make sure you saunter inside to merely marvel at the sheer size of America’s largest department store that spans the length and width of an entire city block and boasts ten and a half levels of eye-catching displays filled a wide array of merchandise to appeal to the entire family.  At Christmastime, a visit with children means a visit to Santa Land and the Puppet Theatre.  You’ll also want to check out the seasonal décor department, as it is a Christmas wonderland in itself!  There are several restaurants inside the store for your convenience as well.  If you’re like me, you may choose to shop the entire time and end up buying a few things, too.  Why not?  You’re at Macy’s Herald Square!  So shop till you drop and then get ready for the next adventure in this concrete jungle! 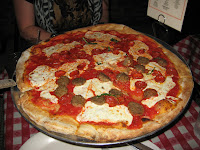 Has all of this shopping made you hungry?  Head on over to Lombardi’s Pizza, deemed America’s First Pizzeria.  Even at 3:00 p.m. in the afternoon, there was an hour wait.  But let me tell you, it was well worth the wait!  Want to taste the competition?  Then head on over to Grimaldi’s Pizza underneath the Brooklyn Bridge!  Both of these pizzerias are among the small number of restaurants who still bake their pizzas in a coal-fired brick oven.  Having been friendly rivals for years, they both fire up a scrumptious slice that makes your mouth water!  But I am sure you are wondering, which one is best? 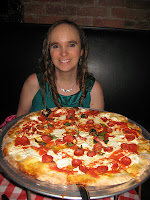 Grimaldi’s and Lombardi’s both have crust that is perfectly thin and crisp, tomato sauce made with fresh tomatoes, and fresh mozzarella cheese and basil.  And of course, you can add whatever toppings you like!  At Lombardi’s, we chose to add pepperoni and meatballs to our pie.  Their meatballs are homemade, sliced in half, and laid on top of the pizza before it is briefly tucked inside the 900 degree oven.  The addition of meatballs made the flavor of this already delicious pizza rocket to the moon and back.  At Grimaldi’s, we chose to go simplistic with a classic pepperoni.  Ultimately, though, there was nothing simple about this pizza.  The complex flavor profile they achieved put them over the top on the New York thin crust pizza scale.  Along with their out-of-this-world pizza, Grimaldi’s maintains an intimate family atmosphere paired with the musical talents of Ernie Barry, an accordion player with vocal talents that will make you think that Sinatra’s back in town.  Whichever you choose, Grimaldi’s or Lombardi’s, your thin crust pizza will have you wondering if you have suddenly been transported into the heart of Italy! 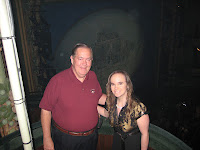 Your trip will not be complete without a visit to Rockefeller Center, especially at Christmastime where you can see the towering tree of lights.  From there, feel free to parade down the center of Times Square as you journey to Broadway.  We chose to take in a show on 42nd Street at the New Amsterdam Theater.  There’s something quite magical about sitting in your very own private box as you sit back, relax, and enjoy a positively perfect production of Mary Poppins!  It truly was supercalifragilisticexpialidocious!  From the acting to the dancing and the singing to the orchestra, everything was brilliant.  A must-see performance for young and old alike! 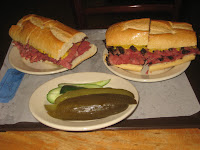 After the show, drop down into the subway and make your way to Katz’s Delicatessen.  Feast your eyes on the mountainous peaks of freshly prepared corned beef, pastrami, and anything else your heart desires!  Their sandwiches have even been featured on the Food Network and rightly so!  The meat is tender, juicy, and has unimaginable flavor oozing out of every bite!  There is a solid crowd even at 3:00 a.m. on a Saturday night, so you know it has to be good!  The perfect place to chow down on some deliciousness morning, noon, or night! 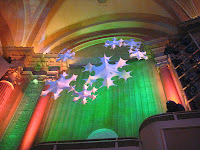 If you are in the city on a Sunday, drop by the Brooklyn Tabernacle, the home of the Brooklyn Tabernacle Choir.  This Grammy Award-winning choir recently had the opportunity to share their talents at the Presidential Inauguration.  Let me tell you, their talent is unsurpassed and hearing them in person is an experience like no other.  I had the privilege of seeing their Christmas program, “Christmas Once Again,” and it was the best Christmas program I have ever seen in my life.  The music reached down into the depths of my soul.  The lyrics spoke to the innermost part of my heart.  Every word spoken, every note sung, and every move made ministered to my heart and soul in such a special way.  It was one of those days I will remember for the rest of my life. 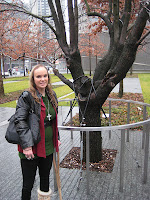 Of course, a visit to New York would still not be complete without a trip to Central Park, the Empire State Building, Trump Tower, the Statue of Liberty, Wall Street, and so much more.  If all of this sightseeing is making you hungry, stop by Joe’s Gourmet for an affordable meal where you can literally get anything your taste buds are begging for from Italian to Sushi and Philly Cheesesteaks to Salad.  A few blocks away, take a moment to wander through the 9/11 Memorial, remembering those who lost their lives on that fateful day in 2011.  The most touching aspect of the memorial is the Survivor Tree, a tree that was scorched but has remained standing as a reminder that Americans will persevere against all odds.


George Washington referred to it as the “Seat of Empire.”  In the 1920’s and 30’s, jazz musicians first used the term “The Big Apple.”  It has been called the city that never sleeps, the Metropolis, and the financial capital of the world.  Boasting the largest number of skyscrapers than any other city in the U.S., it could even be referred to as the City of Skyscrapers.  No matter what you call it, a trip to New York City will exceed your expectations and inspire you to promptly make plans to return!
What are some of your favorite things to see or do in New York City and the surrounding areas? Please comment below and share your recommendations! May you always have joyful journeys!
Jennifer Campbell
SocialCompare
Posted by Jennifer Joy Campbell

Jennifer would love to read your comments concerning Jennifer's Journeys! Feel free to leave suggestions for future topics, too! Please visit again for more amazing adventures all around the world!